The Origins and History of Betty Boop 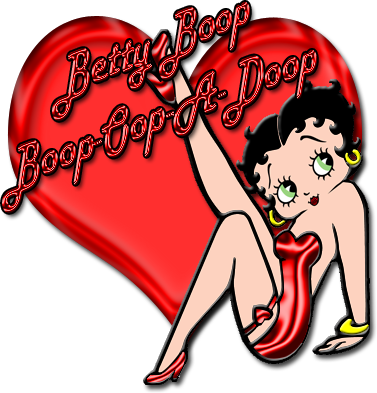 Betty Boop made her first appearance on August 9, 1930 in the cartoon Dizzy Dishes, the sixth installment in Fleischer's Talkartoon series. The character was modeled after a combination of Helen Kane, the famous popular singer of the 1920s and contract player at Paramount Pictures (the studio that distributed Fleischer's cartoons), and Clara Bow, who was a popular actress in the 1920s who had not managed to survive the transition to sound because of her strong Brooklyn accent which nevertheless became a trademark for Betty. The character was originally created in the mode of an anthropomorphic French poodle.

Max Fleischer finalized Betty Boop as completely human by 1932 in the cartoon Any Rags. Her floppy poodle ears became hoop earrings, and her black poodle nose became a girl's button-like nose. Betty appeared in ten cartoons as a supporting character, a flapper girl with more heart than brains. In individual cartoons she was called "Nancy Lee" and "Nan McGrew", usually serving as a girlfriend to studio star Bimbo.

Betty's voice was first performed by Margie Hines, and was later provided by several different voice actresses including Kate Wright, Ann Rothschild (a.k.a. Little Ann Little), Bonnie Poe, and most notably, Mae Questel who began in 1931 and continued with the role until her death in 1998. Today Betty is voiced by Tress MacNeille and Tara Strong in Commercials.

Although it has been assumed that Betty's first name was established in the 1931 Screen Songs cartoon Betty Co-ed, this "Betty" was an entirely different character. Though the song may have led to Betty's eventual christening, any references to Betty Co-ed as a Betty Boop vehicle are incorrect. (The official Betty Boop website describes the titular character as a "prototype" of Betty.) In all, there were at least 12 Screen Songs cartoons that featured either Betty Boop or a similar character.

Betty appeared in the first "Color Classic" cartoon 'Poor Cinderella', her only theatrical color appearance (1934). In this film, she was depicted with red hair. In a cameo appearance in the feature film Who Framed Roger Rabbit (1988), in her traditional black and white, and voiced by Mae Questel, Betty mentioned that work had "gotten slow since cartoons went to color," but she has "still got it, boo bee bah, doo!"

Betty Boop became the star of the Talkartoons by 1932, and was given her own series in that same year beginning with Stopping the Show. From this point on, she was crowned "The Queen of the Animated Screen." The series was hugely popular throughout the 1930s, lasting until 1939. It is still tremendously popular today.

Betty Boop's films found a new audience when Paramount sold them for syndication in 1955. U.M.&M. and National Telefilm Associates were required to remove the original Paramount logo from the opening and closing as well as any references to Paramount in the copyright line on the main titles. However, the mountain motif remains on some television prints, usually with a U.M.&M. copyright line, while recent versions have circulated with the Paramount-Publix reference in cartoons from 1931. On the other hand, Popeye the Sailor was always shown with its original copyright line, as a.a.p. only removed the Paramount production logos from the Popeye cartoons, as well as title cards with the words "Paramount Presents" gracing the top.

The original "Betty Boop" cartoons were in black and white. And as newer product made for television began to appear, her cartoons were soon retired, particularly with the arrival of color television in the 1960s. But Betty's film career saw a major revival in the release of "The Betty Boop Scandals of 1974", and became a part of the post 1960s counterculture movement. NTA attempted to capitalize on this with a new syndication package, but there was no market for cartoons in black and white. As an answer, they had them remade cheaply in Korea, but were unable to sell them due largely to sloppy production that belied the quality of the originals. Unable to sell them to television, they assembled a number of the color cartoons in compilation feature titled, Betty Boop for President to capitalize on the 1976 election. But it saw no major theatrical release, and resurfaced in 1981 on HBO under the title, Hurray for Betty Boop.

It was the advent of Home Video that created an appreciation for films in their original versions, and Betty was rediscovered again in Beta and VHS versions. The ever expanding cable television industry saw the creation of American Movie Classics, which showcased a selection of the original black and white "Betty Boop" cartoons in the 1990s, which led to an eight volume VHS set, "Betty Boop, the Definitive Collection." To date, no official DVD releases have been made in spite of the tremendous interest. In spite of this, there are currently 22 public domain Betty Boop cartoons available at the Internet Archive.

Marketers rediscovered Betty Boop in the 1980s, and "Betty Boop" merchandise has far outdistanced her exposure in films, with many not aware of her as a cinematic creation. Much of this current merchandise features the character in her popular, sexier form, and has become popular worldwide once again. The 1980s, rapper, Betty Boo (whose voice, image and name were influenced by the cartoon character) rose to popularity in the UK largely due to the "Betty Boop" revival.

There were brief returns to the theatrical screen. In 1988, Betty appeared after a 50 year absence with a cameo in the Academy Award-winning film Who Framed Roger Rabbit. In 1993, producers Steven Paul Leiva ("Space Jam") and Jerry Rees, best known for writing and directing The Brave Little Toaster, began production on a new Betty Boop feature film for The Zanuck Company and Metro-Goldwyn-Mayer. The script by Rees detailed Betty's rise in Hollywood in the Golden Age of Hollywood. It was to be a musical with music and lyrics by jazzman Bennie Wallace. Wallace had completed several songs and seventy-five percent of the film had been storyboarded, when, two weeks before voice recording was to begin with Bernadette Peters as Betty, the head of MGM, Alan Ladd, Jr., was replaced by Frank Mancuso, and the project was abandoned.

Ownership of the Boop cartoons has changed hands over the intervening decades due to a series of corporate mergers, acquisitions and divestitures (mainly involving Republic Pictures and the 2006 corporate split of parent company Viacom into two separate companies). As of 2008, Lions Gate Home Entertainment (under license from Paramount) holds home video rights and CBS Television Distribution retains television rights. Ironically, Paramount continues to hold theatrical distribution rights, although any sort of video or theatrical re-release has yet to be announced. But the "Betty Boop" character and trademark is currently owned by Fleischer Studios, with the merchandising rights licensed to King Features Syndicate.

The Betty Boop series continues to be a favorite of many critics, and the 1933 Betty Boop cartoon Snow White (not to be confused with Disney's 1937 film Snow White and the Seven Dwarfs) was selected for preservation by the U.S. Library of Congress in the National Film Registry in 1994. Betty Boop's popularity continues well into present day culture, with references appearing in the comic strip Doonesbury, where the character B.D.'s busty girlfriend/wife is named "Boopsie" and the animated reality TV spoof Drawn Together, where Betty is the inspiration for Toot Braunstein. A Betty Boop musical is in development for Broadway, with music by David Foster.